RUSH: I wish I could use that too. But I don't dare. I don't dare use either one of them. I just cracked a couple of jokes here to the staff, and their reaction is to shake their heads. They're laughing uncontrollably and then shaking their heads at the same time and saying, "You better not. You can't say that." And, of course, they're right. 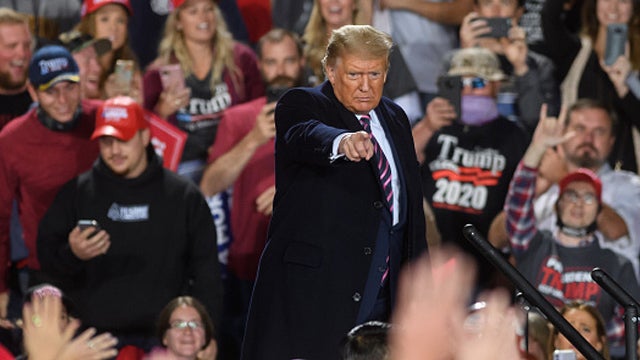 Anyway, how are you, my friends? It is great to have you with us. It's great to be with you. We have three hours of broadcast excellence straight ahead. The phone number if you want to join us today is 800-282-2882, and the email address, ElRushbo@eibnet.us.

So President Trump, another rally, Moon Township by Pittsburgh last night. You know, folks, I have to tell you something. I watch these rallies. But more than that, I look at these crowds. Do you realize how big these crowds are? These crowds, especially in the past couple of weeks of rallies, these crowds have been bigger than any of the crowds in 2016. And the campaign releases photos of the crowd after the event or during the event. It's massive.

And I have found myself asking a question. Who are these people? And I'm not asking that in terms of being critical at all. I really would like to know who they are. Let me put it this way. Who is it that would, I know the weather's not cold yet, but it's in the sixties and fifties now in late September. These people are showing up from who knows where. I'm sure nearby, but they're showing up and you don't just drive to the event here and spend a couple hours and leave.

You've gotta get there early if you want to get in. You've gotta go through security. It's pretty much a multiple-hour commitment to go to one of these things. And you're not gonna get close enough to the president to get a selfie photo or a handshake, certainly not, or an autograph. The president pretty much scoots when these things are over, after he dances to YMCA. They play YMCA as the closing music when the president finishes. And he does his little dance and jive to it and then gets on the plane and splits.

But there are literally thousands and thousands of people. They're being totally ignored by the media. It's as though they're not there. They are taken for granted. It's not assumed, and it's not even questioned what impact all these people are going to have on the election. It strikes me how odd it is that there isn't any curiosity about it. And I know why.

I just watched television here before the big broadcast began. And there's some Democrat senator on named Chris Murphy. This was on Fox. And Chris Murphy is going on and on and on about how the Republican Party is just a cult. A cult? Have you all seen the way the casket of Ruth Ginsburg arrived at the Supreme Court today? If you want to see a cult, take a look at the way the left is handling the death of Ruth Bader Ginsburg.

Anyway. So this guy, this Senator Chris Murphy, says, "These guys, they're just a cult." And he says (paraphrasing), "I'll give you the proof. The proof is that they are already unanimously supporting a nominee that they don't even know. They don't know who the nominee is. The president isn't gonna announce the nominee until Saturday at 5 o'clock, and yet this cult party, the Republicans, are in total unity already." 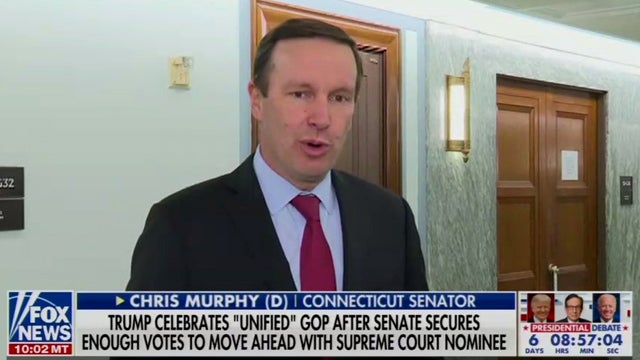 And I said, you know, that's very clever, Senator Murphy, but that's not the way to look at this. How about you people on the Democrat side? You are already destroying a nominee that you haven't seen yet. You have already begun the process that you engage in every time one of these things happens. You have already begun your attempt to destroy the nominee, and you don't know who the nominee is, and yet the Republicans are somehow a cult because they are supporting a nominee that they don't even know yet.

The fact is they do know. Trump provided a list. And the fact of the matter is that anybody on that list is pretty much gonna be accepted, and particularly with the top two that are speculated here, Judge Lagoa and Judge Barrett. I mean, either one of those two would be a grand-slam home run. They've been vetted before, Senator.

They are on the judiciary as is, already out there on the circuit court. So they've been through this. You people in the Senate, the Democrats, know who they are. You've vetted them. Trump gave us a list, so we know who these people are. They've got judicial track records. You don't have to be a cultist. This is not a blind acceptance. It's not as though we don't know who the nominee is gonna be. We just don't know specifically which one it's... 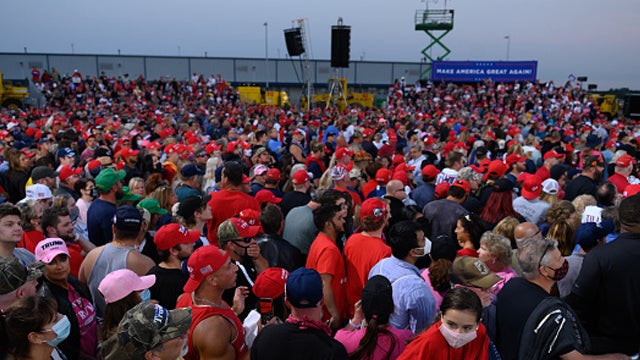 The watch, the microphone hears water running and thinks it knows and so it asks you. That has to be what happened here. So, at any rate, they can't stop the nominee. They don't have the votes. Now, a clarification about Mitt Romney. Mitt Romney has not promised to vote for the nominee. Mitt Romney said that he's not going to vote against a floor vote for whoever the nominee is.

But he is going to wait to make sure the nominee is qualified. Now, Romney is like everybody else. Romney knows who it's gonna be -- one of two, one of three. Romney. If he wanted to, could announce his support, but he's gonna wait until Trump actually names the judge. Trump's out there saying, "Oh, man the Republicans have never been more unified than they are now."

And that's true in any number of ways you might want to look at it. You look at 92% of the Republican Party -- the voters; the base, if you will -- supports Trump. Eighty-two percent are in favor of one of these two judges being nominated. The Democrats are just frustrated that as it appears on paper, they can't stop the nominee.

But you know what, folks? It's not gonna stop them from trying. They're gonna do what they do. Once there's hearings happen -- three days, four days, whatever the limit is -- they're gonna do what they do. They're going to do everything they can to destroy whoever the nominee is. But I think it's classic. Senator Murphy (impression), "These people are a cult. They're supporting a nominee they don't even know yet."

Back then, if you recall, the conventional wisdom was that the size of the crowd at rallies was irrelevant to elections, to how much strength a candidate had. It was irrelevant to votes. The conventional wisdom was that rallies, you could have beaucoup people. In other words, it didn't matter that Hillary Clinton was only drawing 200 or 250 and Trump was drawing 15,000. It didn't matter 'cause crowd size doesn't tell you anything.

So they ignored the people, they ignored who they might be, and even to this day, as I have said countless times, maybe so many times I've bored many of you, but the professional political class on the Democrat side to this day has not endeavored to find out who those people are. They have not tried to find out who the Trump base is because their arrogance and condescension has already told them who the Trump base is.

And who are they? They're a bunch of dumb, stupid hayseeds. And that's all you need to know. They're a bunch of hicks who make up a cult. They're unreachable. They're not worth spending anytime on at all. That's how the Democrats have seen them since 2015 and it's how they see them now. Total discount, total ignoring, and it's so much more than that, particularly the makeup of the crowds in 2016.

Therein lies the secret of the Trump victory. Who were those people in 2016? And when you find out -- 'cause I'm gonna tell you after the bottom-of-the-hour break -- when you find out, you'll understand why it's relevant.

RUSH: You know, I was just reminded. It's even worse. Here you have this Senator Chris Murphy talking about how the Republicans are a cult because they're unified. Actually, they're not. Now, Trump said they're more unified than they've ever been, and that's true, but we still have two defectors, and that would be Susan Collins and Murkowski.

Before I get to my in-depth breakdown of my question, "Who are these people at the Trump rally?" And, again, it's not a critical observation, don't misunderstand. Let me start with line 1. I want to get calls on this now rather than an hour from now when people may not know why the caller is talking about the subject. Get the subject and the calls buttressed back-to-back so it makes sense.

Stephanie here in Swansboro, North Carolina, welcome to the EIB Network. Great to have you with us. Hi. 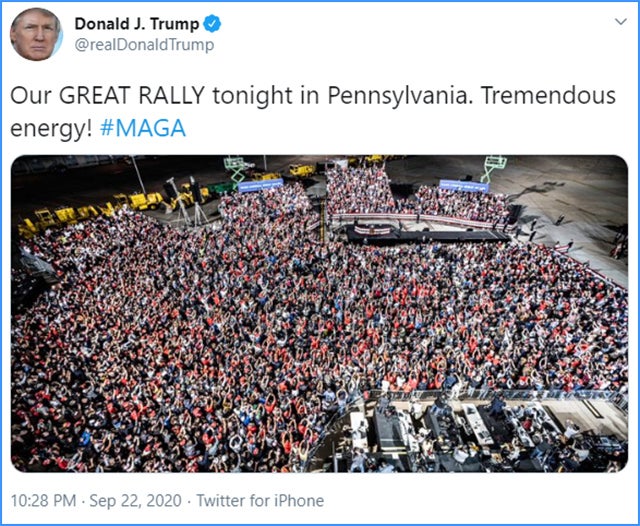 CALLER: Oh, my gosh. Rush, this is the greatest thing that's happened to me in 2020. So I wanted to call because I've been to two Trump rallies, I've attended one Trump boat parade, and I was in a Trump boat parade that had 3,500 boats in it -- and we know that we're being dismissed by the media.

CALLER: -- amongst ourselves when you're waiting four, six, eight hours, and we're all employed. We all took a vacation day. We've taken our kids, and we love that we're being dismissed because the longer the time goes by that they don't have a clue as to who the real patriots of our country are, the hardworking people are?

The more they ignore us, the longer and the more elections we're gonna win. The one thing that we all discovered is typically the older people, they get the landline phone calls as to who they're gonna vote for. These little 80- and 70-year-old people -- and myself included -- we've all lied to the pollsters. We've all said, "Biden, Biden, Biden, Biden."

RUSH: Oh, yeah, I know. I know the games you're playing, and I heartily applaud lying to the pollsters. I don't want to say that too loud. I don't want you to quote me on that. But, look, I know who you are. This is the thing. I've got a very in-depth explanation of who these people are, you and others at these rallies, and I'll get to it in the monologue segment in the next hour. I'm glad you called, Stephanie.