RUSH: There's a little story here, headline: "Today I Gave My Dad a Choice: Trump or His Grandkids and His Son." Remember we had a discussion over how Donald Trump and support for Trump is breaking up families and how children are blackmailing their parents, saying: 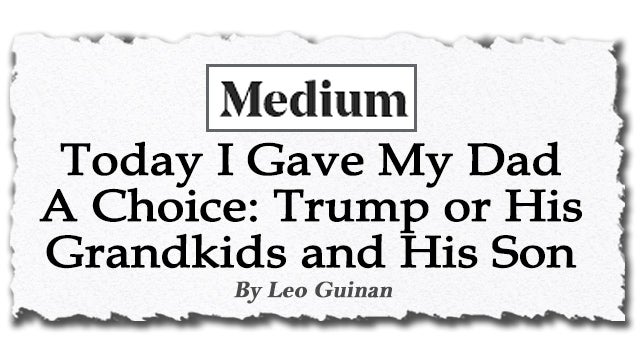 "If you want to see your grandkids -- if you want your grandkids to be part of your life, if you want to be part of their life -- you gotta renounce your support for Trump." Remember that? The story was by a guy named Leo Guinan. Leo Guinan wrote the story in a publication called Medium, and it was a piece of sheer emotional blackmail and is a glaring example of how the left is using emotional blackmail on their parents.

We've talked about this for a while. I've shared with you a number of people who are my age who now have grandkids, and they are afraid to say one positive thing about Donald Trump in the presence of their 30-year-old children for fear that their 30-year-old children will deny them the chance to be a part of their grandkids' life, and so my friends who are my age do not dare say a word about Donald Trump.

Some of them don't even say a word about me. Some of them have been forced to renounce me and the EIB Network. That's how deep the emotional blackmail is. So, anyway, Mr. Guinan writes this piece, "Today I Gave My Dad a Choice: Trump or His Grandkids and His Son -- Today I found out my dad put a Trump sign in his yard, and I got off. Really off and I sent him and my mom a text message.

"This is what it said: 'Due to the signs in the yard, the kids and I will not be down. The current occupant of the White House is preaching hate and violence, endangering the lives and safety of many of my friends. This is not acceptable to me at all. There is a complete disregard for women, minorities, science, ethics, and morality." Remember we tore this down. We unpacked all this.

"'Please consider if you support Trump that much. Because I hate him that much. I wanted to be upfront and honest about my feelings,'" and screw you if you don't renounce Trump and take those signs out of the yard. "At this point, it is not acceptable to me. You can vote for whom you wish. But I can choose who I surround myself with. I love my dad, but I can't be around him until he understands how vital I believe this election to be and what is truly at stake. It is not easy.

"But it was necessary. Now to see what fallout occurs." So here's this guy, Leo Guinan, and he's talking about how Trump has total disregard for women, and I pointed out there are more women in the Trump administration in positions of genuine influence and power and relevance than ever were in the Obama administration or any other Democrat, or Clinton administration, to boot.

Minorities? Trump has done more... Look at the African-American unemployment rate pre-COVID. Trump has done more for minorities in this country than you can shake a stick at. Science? That's all about climate change. Ethics, morality, all this? Anyway, there's an update to the story. Mr. Snerdley found this. It's at BizPac Review, it's not at Medium, and the headline is:

He "described himself as being 'toward the liberal end of the spectrum,' noted that he realized the irony of the situation when he found himself the topic of discussion on the Rush Limbaugh Show." Let me tell you: It's the Rush Limbaugh Show that caused whatever change of mind this guy had. Nobody else was talking about this. That's why this program equals: Cutting edge of societal evolution.

This guy, Leo Guinan, "who asked his parents with 'hands shaking' and 'tears in eyes' to remove a pro-Trump sign in their yard came back with an apology after his rant backfired. Writer Leo Guinan penned a personal recounting of the lessons he learned after giving his family an ultimatum on their display of support for President Trump, explaining in a follow-up entry ... this week that although he 'wanted to trigger a response' with his initial piece, he wanted his apology to 'go viral' as well," meaning this is the apology.

He didn't mean to do this. He didn't mean to talk to his parents this way. So, anyway, what's the point here? Well, there are many, many points here. One is: If you're a leftist, be really careful if I find out about what you're doing and tend to go public with it, 'cause then you're gonna be embarrassed when the whole country (chuckles) finds out how cockamamie you are.

But then he's had to backtrack and apologize, meaning his parents didn't have to change. They didn't have to remove the Trump sign and this guy caved and is gonna make sure that the grandparents are allowed to see the grandkids. So this is a lesson for you out there, you parents who are being emotionally blackmailed by your 25- or 30-year-old kids. Tell 'em to go pound sand! You should have doing that all their lives anyway.

RUSH: By the way, Mr. Guinan, Leo Guinan wrote here that, you know, who am I to wield that kind of power over anyone's behavior? Who am I to tell my dad he can't see his grandkids if he's got a Trump sign? Who am I? I can't do that. I apologize to my dad in person. I screwed up with it. I own that. I'm okay with making mistakes 'cause that's the best way to learn. So I screwed up in a big way, and I'm gonna apologize in a big way. This program made all that happen, I tell you.